Home » How To » GUIDE: How to Create and Download Masked Aadhaar Card?

GUIDE: How to Create and Download Masked Aadhaar Card?

How To, News, Security, Tips
GET LATEST UPDATES: Click Here to Join our Telegram Channel

Aadhar Card is one of the significant Unique Identification Cards for Indian residents. It is utilized as a Govt. Identity Proof, as well as Address Proof and can be voluntarily submitted to avail services such as taking a sim card, creating a bank account, opening a gas cylinder connection etc.

However, the security of aadhar card had been a factor for major concern since its launch.

The Aadhar repository stores our photo, address, fingerprint and iris details and they are all linked to a 12 digit number. Hence, a lot of people criticized the sharing of Aadhar No to avail different services as they can be easily used in a way against us.

Hence, the Unique Identification Authority of India (UIDAI) has introduced a new feature in a bid to make Aadhaar even more secure. The feature called ‘Masked e-Aadhaar.’

Today, in this post, we will discuss the Masked Aadhar, what is it, how you can create your own masked aadhar card and download it.

So, shall we begin?

What is masked Aadhaar?

As the name suggests, Masked Aadhar allows one to cover the 12-digit unique identity in the downloaded Aadhaar or e-Aadhaar. This solves the problem in cases where one doesn’t feel comfortable sharing their Aadhaar number.

The #eAadhaar is now available in two formats:
1. Regular Aadhaar
2. Masked Aadhaar
You can download these from: https://t.co/iBrWjEwBsU
To know more about eAadhaar visit: https://t.co/H3CTmnBZtP pic.twitter.com/M90Q6w2SYq

The UIDAI announced that the E-Aadhaar, which is a digital version of your Aadhaar, will be available in two formats: Regular and Masked Aaadhar. E-Aadhaar is password protected and digitally signed UIDAI. As per as the Aadhaar act, the e-Aadhaar is equally valid as the physical copy of Aadhaar for all purposes.

Till now, the Regular E-Aadhaar was only available for download, but now, they have introduced the ‘Masked Aadhar.’

In the ‘Masked Aadhaar’ options, the 12-digit unique identity will be, masked and only the last 4 digits will be shown hence sharing your e-Aadhaar will no longer be a problem. However other details like your photograph, demographic information and QR information will still be visible.

So, it is an effective method to protect your Aadhar number, so that nobody can access your digital details from the aadhar repository.

Why Masked Aadhaar is important?

Masked Aadhaar protects us from the misuse of Aadhaar data.

The next time a service provider asks for your Aadhaar card, you can just give your downloaded masked e-Aadhaar card which will ensure the safety of your information.

Earlier the only security available was the biometric transaction. Addition of this new feature will also users more privacy and confidentiality of Aadhaar information. Not only it will hide the 12-digit unique identity but, it will also provide a Virtual Aadhaar ID (VID) number.

UIDAI is not only promoting the use of the Aadhaar Virtual ID (VID) but also added a new way of generating a VID number. VID is a single-use random number mapped out from your Aadhaar card and can be used instead of the Aadhaar number in the authentication input.

Users who want to download the e-Aadhaar can do by going to UIDAI websites- https://uidai.gov.in/ or by visiting https://eaadhaar.uidai.gov.in.

There are three ways to download e-Aadhaar. You can use the either use the 28-digit enrolment number or by the actual 12 digit Aadhaar number or using the virtual identification number (VID). 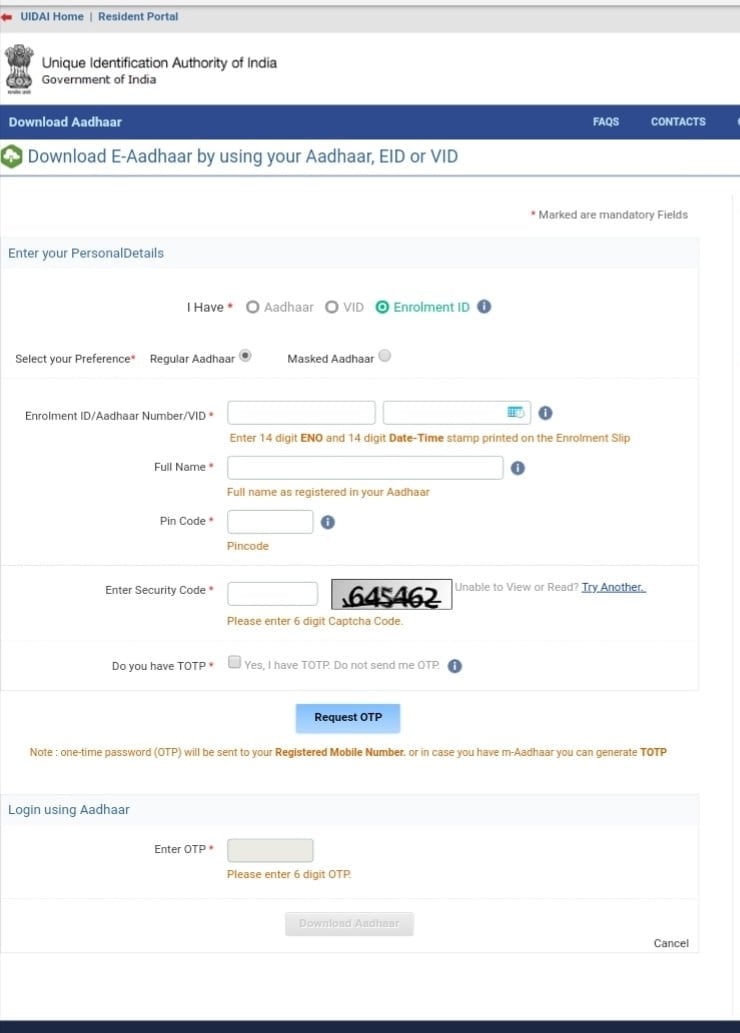 Users can download the e-Aadhaar by using the 28-digit enrolment number, their name and pin code. In this process, an OTP is sent to the registered mobile number. Residents are can also use the TOTP (time-bound OTP) instead of the OTP. OTP can be generated by using the mAadhaar mobile app.

Similar to the previous options, here residents have to use the 12-digit Aadhaar number along with their full name and PIN. In this process, an OTP is sent to the registered mobile number. Residents are can also use the TOTP (time-bound OTP) instead of the OTP. TOTP can be generated by using the mAadhaar mobile app.

The downloaded e-Aadhaar is password protected, and often it becomes very tricky for many users who don’t know how to open it. There are also no on-screen instructions for the same.

Well, if you don’t know, read below:

If your name is RAVINDRA KUMAR, and your birth year is 1980, then your e-Aadhar password will be RAVI1980. It is case sensitive.

Some More Points to Consider:

You can also take a print out of your e-Aadhar and use it as an offline verification document. Make sure to verify the digital signature by clicking on the signature property and selecting “Validate Signature.”

Remember, your printed e-Aadhar is valid as your original Aadhar. Nobody can deny taking it as a verification document.

Also, there are no xerox copies of e-Aadhar, every copy is a valid original proof of your identity and address. 🙂

That’s all about E-Aadhar and Masked Aadhar. I hope from now onwards you will feel safe while sharing your Aadhar details with anyone.

If you have any queries regarding this, don’t forget to comment below. I will try my best to assist you.

That’s all for today. I will be back soon with another exciting update! Stay tuned, folks!

[Tutorial][Root] How to enable Smart Compose Feature on Gmail App?