Home » News » Windows 11 Best Features that You Should Know

Windows 11 Best Features that You Should Know

After years of waiting, Microsoft finally introduced its new Windows 11 operating system on 24 June 2021. Windows 11 comes with a fresh user interface and a bundle of new features. The first preview for Windows 11 can be downloaded now for users who are part of the Windows Insider program. Microsoft has said that Windows 11 will start rolling out over the 2021 holidays.

Windows 11 provides one of the best features that we have seen in any version. With the completely new round-cornered look, Windows 11 gets improvised changes in the components like Microsoft Store, Start Menu, Taskbar, Widgets, Teams integration, and many more. All these features and updates make Windows 11 very promising and users are curious about these new features. In this post, we are going to list all of the best features of Windows 11 and how you can download Windows 11 on your pc.

Special thanks to windows for providing images related to the new best new features of Windows 11. This will help users to take a visual idea about the all-new features and re-designed interface.

There are various applications that we always want to use on our desktops. Keeping this in the mind, Microsoft is bringing Android apps natively through Microsoft Store with its new Windows 11. This feature will allow users to download many useful android apps directly to their PCs without using any third-party applications. Earlier users have to install emulators to run android apps, these emulators consume a lot of system resources and RAM.

With the help of Intel and Amazon, more than 500,000 applications will be made available including, Disney Plus, TikTok, Netflix, Pinterest, Prime Video, and many more. Users can open android from Start Menu, and running apps will also appear on the Taskbar with their to run android apps on their Windows 11 PC. The new Windows 11 interface now gets Widgets. These Widgets are customizable feeds that are highlighted in Taskbar. Widgets slide out to show pieces of information such as calendar, weather, local traffic, To-Do list, sports/esports news, stocks and provides quick access to photos recently saved on OneDrive.

Users can find a button for Widgets on the new Taskbar. The list of Widgets will slide out from the left side of the screen by clicking on the button. This series of widgets give users the at-a-glance information, and it can also be expanded to full screen. The new Widget feature in Windows 11 is somewhat similar to the News and Interests of Windows 10.

Teams is a Microsoft application for video chat and conferences. Windows 11 comes with Microsoft Teams integrated directly into its operating system. Earlier users have to download Teams, but now they can find it preinstalled as a system application. Teams is available across all major platforms including, Windows, Android, macOS, and iOS.

Users can find Teams on the newly redesigned taskbar. It can be launched by just clicking the Teams button, and it allows users to choose if they want to message text, voice, or video call one of their contacts. The option to open the full version of Microsoft Teams is available at the bottom of the chat screen.

No doubt, Windows is the best operating system for gaming, so with the new Windows 11, Microsoft took the gaming experience to a new level. Windows 11 now comes with the Auto HDR feature that improves contrast and color output. The best part of Auto HDR is that game developer does not need to redevelop their games. Microsoft also demonstrated the side-by-side comparison between SDR and Auto HDR during their launch event. One can notice the big difference between them by looking at the below image.

Many big title games take a long time to load. To reduce this load time, Windows 11 comes with the DirectStorage feature. This feature was already available for both Xbox Series X and Series S users. Xbox Game Pass is available right into Windows 11 via the Xbox app. All these features make a big change in the gaming experience and are a boon for gamers. With Windows 11, users can now create separate virtual desktops and can personalize them with different wallpapers. This feature allows users to create a desktop for various uses like home, office, school, gaming, or anything else. Users can toggle between them by using Windows trackpad gestures. Many users found it similar to macOS virtual desktop feature. Windows 11 gets a new fresh look with a more attractive and user-friendly interface. Now icons are placed at the center of the taskbar including, Start Menu, Search, and apps. Start Menu can be opened by clicking the Start Menu icon available on the taskbar and will show the recent files, docs, and apps. The search bar is at the top of the Start Menu, followed by apps in the middle, and recommended files at the bottom. The All Apps button can be used to browse through the traditional list of apps.

Microsoft aimed to make things easier to access and faster with the new design. Windows 11 got the round-cornered and minimal theme with a streamlined taskbar. Windows 11 comes with new colors and transitions and an improved dark mode that is mesmerizing. See also  How to Backup Everything on Windows using Todo Backup?

Users do work on multiple windows like browsing on Microsoft Edge while typing down the content on Word. Microsoft Windows 11 lets users arrange these windows in different layouts on the screen.

On any opened window, there is a square box button on the top right corner of that window. Earlier this button was used for maximizing the window size. Users will get various layout options when they click on this button, select the preferred layout, and position for different windows. 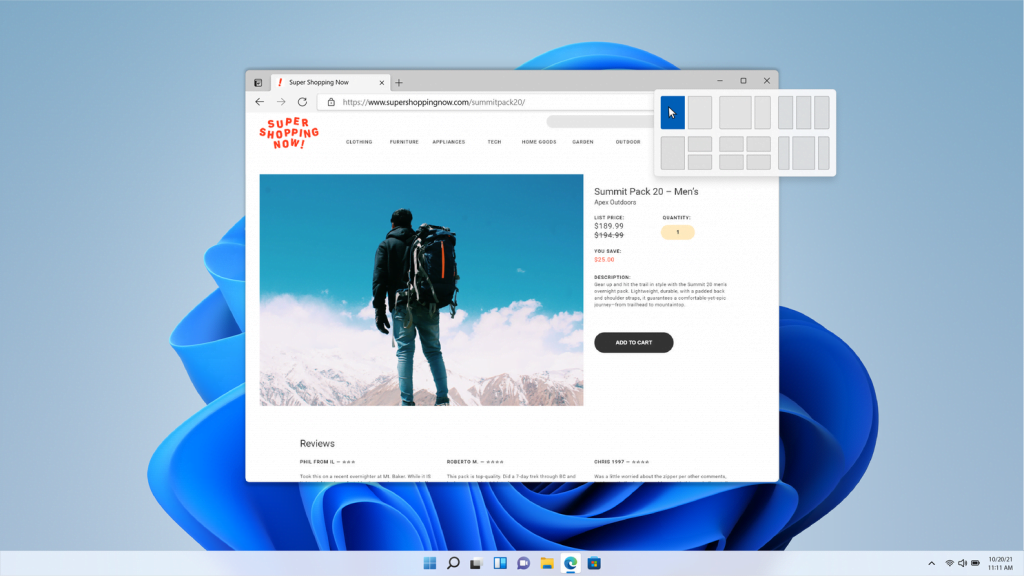 Snap groups contain the bundle of windows that were saved in Snap Layout. These groups can be found in the new taskbar and can be accessed easily to minimize or maximize them as a group. This feature improves workflow and productivity. Users can access different groups of sites and apps that were opened earlier by hovering over the browser in the taskbar. A popup of these apps and sites will appear, click on the one that you want to open.

Microsoft Windows is the most popular operating system used in desktops. The new Windows 11 stands out with one of the best features and interface designs. In this article, we have discussed all the features of Windows 11 in detail and looked at how they are more user-friendly.

With all the above-mentioned features, there are many other minor improvements. Windows 11 has more space between the icons making it more friendly for touch screen devices. Devices with the stylus will get improved haptic feedback while drawing or using the on-screen keyboard, which feels more like an actual pen. The voice commands also got major upgrades like users can delete words by just saying “delete that”.

Hope you enjoyed reading about these amazing features of Windows 11. Now you can easily Download and Install Windows 11 on your computer with our step-by-step guide. Keep following us for more updates on windows 11 and other tech-related stuff. You can ask your queries in the comment section below our team is always there to help you out.

That’s all for now. Thank you for reading. I will be back soon with another interesting article. Keep visiting HiTricks. Don’t forget to join our Telegram Channel for the latest tech updates.

GUIDE: How to Apply for Uni 1/3 Credit Card?

How to apply for West Bengal Student Credit Card?

How to Recover Permanently Deleted Files and Folders from Google Drive?

Why should you learn Java Programming in 2023?

How To Improve Customer Experience?

Key Signs Your Company Needs to Upgrade Your Software

Refinansiering Av Kredittkort: Why Do It And How To Choose Lenders

How Social Media Influenced The Art of Photos