Home » Tips » How to send Voice DM on Twitter?

Twitter just rolled out a new feature of voice messaging for Direct Messages (DM). Indian users already got the voice messaging feature with the new Twitter update. Other platforms like Facebook, Whatsapp, and Instagram already has the feature to send personalized voice to other users. So it is obligatory for Twitter to provide Voice messaging feature. However, just like Twitter voice tweets, users can send voice DMs that are a maximum of 140 seconds long.

Twitter introduced these audio tweets feature back in June which allows users to send tweets in the form of voice notes with or without texts. Twitter says that this new feature will allow users more ways to express their feeling and it creates more human experiences for storytellers and listeners. Although, this feature is not released for everyone and it is under development.

However, they launched Voice DM and voice tweets for India.

“We’re excited to bring the voice messages in DMs experiment to the country and give people a new way to express themselves and help them connect through the nuances, emotion, and empathy built by hearing someone’s voice,” said Manish Maheshwari, Managing Director, Twitter India.

In today’s post, we will be looking at the Twitter Voice DM Feature and discuss how you can send voice DMs using Twitter. Here’s an overview:

See also  Step by Step Tutorial: How to get Blue Verified Badge on Twitter? 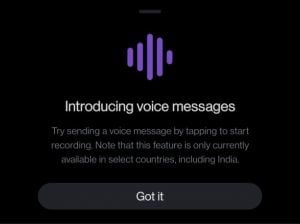 Twitter voice DM works like voice tweets, The voice message can be only 140 seconds long. But this feature is only available for Android and iOS devices via App you can not use Voice DM features on the Web platform. However, Twitter is planning to add this feature on the web soon.

To get this feature, make sure you have the latest version of the Twitter App installed on your mobile. If you still don’t find it, most likely the feature has not been released for you yet. You need to wait for some more time to get the feature LIVE.

1. Is there any limit on sending voice DMs?

Yes, You can only send 140 seconds long voice messages at a time. The good thing is you can send multiple messages if you have more to say. It is seamless.

No, Twitter does not embed this feature for Web user but they are going to release for web soon.

3. Does everyone have voice tweets?

No, the Voice Tweet feature is in Beta state and available only for a limited group of people on Twitter. However, in the upcoming months, you can see the voice DM feature for everyone.

Voice feature is nothing new as most of the famous media apps are already have this feature for a long time. However, Twitter doesn’t have this feature till now and after adding the Voice DM feature it may help in growing Twitter’s popularity and ease for users as well.

You can follow the above steps to get the Twitter Voice DM feature on your mobile as well. We completed a detailed article about Twitter voice DM if you face any problem while sending voice DM on Twitter then ask in the comment section we will happy to help you.

By the way, here are some of our best social media posts that you may want to check out:

Also, if you love to get updated with all the latest tech news and updates then make sure to join our Telegram Channel for getting the latest tech updates. Don’t worry we won’t spam your inbox with promotional and repetitive content.

How To Earn Money On Spare Changes Using Spenny?