Apps and Software, Google, How To
GET LATEST UPDATES: Click Here to Join our Telegram Channel

Today is the day of technology and gadget powers, and Human life depends on technology and gadgets. One of the most basic needs of us from technology is Apps. We can say that our life is now quite impossible without apps. Usually, people download the apps from downloading stores and love to share or transfer apps from one device to another.

There are some common ways to share apps and data; in-line sharing and transfer mode, Bluetooth sharing, app sharing apps, etc. Lately, Google Play launched a feature named Google Nearby Share to share app from a valid and required distance. In this article, we will tell you about the Google nearby share app and how to share Android apps by using the Google Nearby Share app, but before moving further, Let us describe Google Play a bit.

Google Play, informally known as Android Market, is a digital distributing market that offers various services. It serves exclusively to the official users of the Android Operating System. It is one of the broadest digital media stores which offers music, books, games, apps, and television programs. Usually, Google Play offers some apps to share the apps and data, but recently it updates a feature in it to share apps which are named Google Nearby Share.

Google’s Nearby Share is a recently updated feature that allows you to get rid of any other app-sharing apps, and it allows you to share apps from a certain distance by just using Google Play. It is one of the cheapest and most acceptable ways to share data because it needs no internet connection, and also, it won’t need the connecting and receiving device on the same Wi-Fi network.

All you need to do is open your Google Play and make some basic data sharing steps via Google Nearby because Nearby share allows you to share apps to a nearby phone and any other devices easily and rapidly. Here are following some basic steps to share Android apps by using Google Nearby Share:

Location: The most crucial step of app sharing by using Google Nearby Share is to on the location on your smartphone.

1. Open up the Google Play Store 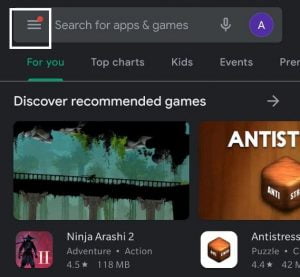 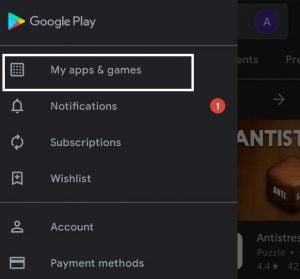 When you did open Menu, you will get to see some app’s category that users liked or downloaded by users. To move forward in Android app sharing by using Google Nearby Share is to go on My Apps and Games. It is located just under the Google Play logo, click on it, and you will move to the next page.

5. Choose to Send or Receive 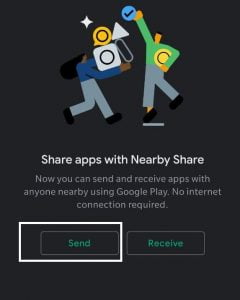 After clicking on the Share option, you will choose to send or receive option. If your device is going to send the file, then click on the “Send” option, and if you are receiving the file, then beyond these steps, you should wait for the sender to send the file when he/she sent the file you’ll get notifications with the receive button. All you have to do is to click on receive to receive the file.

6. Click on the file you want to send(for senders only) 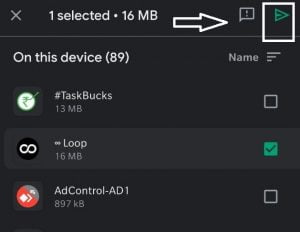 If you are the sender, you have to select the file you want to send. Google Nearby Share App allows you to select multiple apps, and you are allowed to send them simultaneously.

7. Now ask the receiver to click on Receive Tab and you will see his/her name on your mobile.

8. So that’s how you can Send or Receive apps using Google Play Nearby Share App. You don’t require any other apps to use the share feature. Simply update your Google Play Store and you will see the Share feature in it.

See also  How to access iCloud passwords on Google Chrome?

Here we have described all about the Google Nearby Share App and share Android Apps by using it. If you find this article worthy, then kindly share your notions and experience with us. If you have any questions, just drop a comment below. I will be happy to help.

Do let us know how you liked using the app. That’s all for now. I will be back soon with another interesting update. Keep visiting HiTricks. Don’t forget to join our Telegram Channel for getting the latest tech updates.

Anuj is a 21-year-old blogger from Bareilly, Uttar Pradesh. Currently pursuing B.sc in Programming and Data Science from IIT Madras. Apart from being an avid learner and a tech enthusiast, he loves playing PC Games and likes to keep himself updated with the latest trends in the tech industry.