Facebook developers are busy in upgrading its app user interface and bringing more and more features from its website version to its android app. Recently Facebook pushed a beta upgrade on Google Play bringing in some of the useful Website only features to its Android App. It also made some notable changes in its user interface. Well, take a look at the sneak peaks that’s coming on Facebook App.

First and Foremost I will talk about changes in User Interfaces. The first thing I noticed after getting the beta version of the app is the changes in user interface. The Facebook Feed now leaves some spaces from both the left and right corners and loads in the middle. Well, this thing may not reflect in the final release, as this does not do anything special rather than just keeping some space vacant and do nothing.

All of these were previously available, but now it became more compact at a single place. 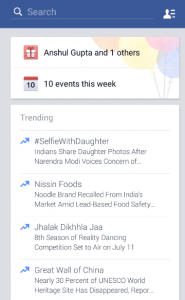 Facebook brought this cool sidebar feature for its users. Like the website sidebar, this sidebar also has some of the important features from its web version.

Well, you know that in general our mobile devices have height bigger than the width, which is directly opposite to our computer devices. So, placing the sidebar on the web version is easily accessible. On the other hand, to access it on mobile version, you need to rotate your device from portrait mode to landscape mode to view the side bar. Sidebar gives enough spacing to the Facebook to load it conveniently.

Yes, you heard it right. You can check your events list on the news feed sidebar. It will show the upcoming events list in coming days. 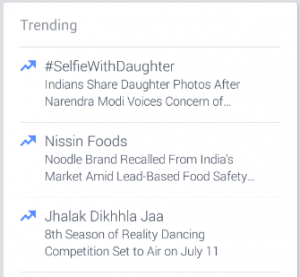 Ah, Finally! Facebook has imported its trending section and added it to its android app. You can now know the latest trending hashtags on the go wherever you have your android device to carry. Click on each trending news to view the trending topic the same way it loads o its web version. 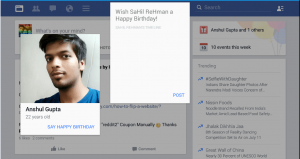 Wishing your friend happy birthday is easier with the new card style birthday floating stickers! You won’t have to go through the menu and find current birthdays, because its easily accessible from the Facebook Sidebar.

These are only some of the great and awesome features, we have more amazing features coming on Facebook, just prepare yourself for getting the big update soon. Thanks for reading the article. Do share if you like it. Keep Visiting HiTricks!